The author: Searching for value in ludicrous ideas 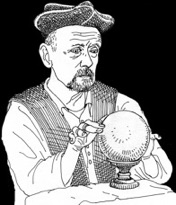 Since the early 1970s, I have toiled away quietly in my free time creating a “line” of alternative products and systems that I hope will benefit or at least amuse my fellow consumer-citizens. I have also ventured into an edgier area, making predictions about the future. My ideas, and my methods for arriving at ideas, are somewhat unique. I have perhaps benefitted from having had little formal instruction in art, nor training in engineering or industrial design. Curious images have filled my mind during weekends and odd free moments, while earning a living in careers as urban planner, newspaper artist and future trends analyst at California companies. Only after I turned 36 did I discover that I had an inventor and designer inside myself, wanting to come out.

On long trips or during boring commutes, I have made use of time that is normally wasted watching scenery by sketching product ideas and cartoons on my home-made “automobile drafting board” (once featured on a TV station in Sacramento, CA). The board sits at an angle against the dashboard and is fitted out in black naugahyde to match the car’s interior. I am unaware of any California law forbidding drawing while driving.

Before I began to think of myself as an inventor, I was doing cartoons with an environmental theme for Cry California, The Sierra Club Bulletin. and Wilderness. 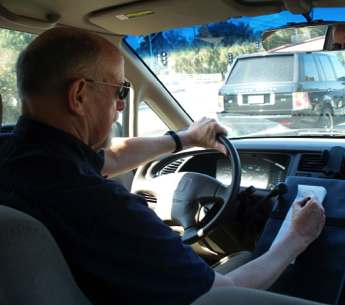 At various times, I have chosen to sketch on my homemade automobile drafting board. The 2009 note (left) was drawn at 80 mph on highway I-5.

My drawings have been featured in newspapers and magazines both nationally and abroad. Aside from the magazines mentioned above, a short list of magazines includes Road & Track, Harper’s, Utne Reader, Whole Earth Review, Esquire, The Futurist, Design Mind, Good, Fastcompany, as well as Box and Brutus (Japanese magazines). Three books of my work have been published: What the World Needs Now, Ten Speed Press, 1984 and 2001. Third edition, 2012; Public Therapy Buses, Information Specialty Bums, Solar Cook-A-Mats and Other Visions of the 21st Century, 1st Edition, St. Martin’s Press, 1991. In 2013 I published an expanded Second Edition. A new book, Have Fun Inventing, was published in 2012.

I was born in 1938 and grew up in the San Francisco Bay Area. My undergraduate studies were at Yale University and U.C. Berkeley. I live in Northern California with my wife and son. 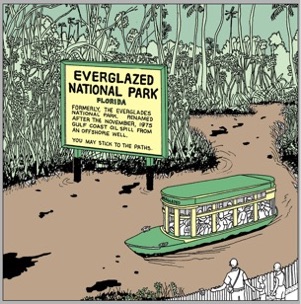 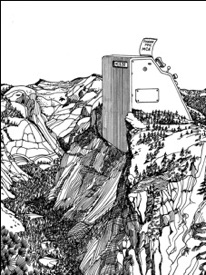 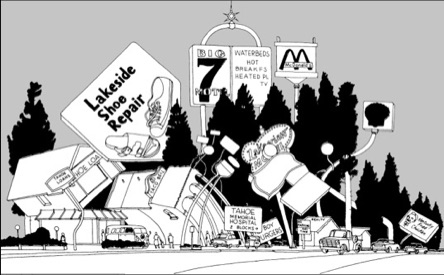 My survey of strip commercial businesses along the shores of South Lake Tahoe, CA revealed a tangle of ill-planned and cheap commercial enterprises.  My report was in Cry California magazine, Winter, 1977-78.